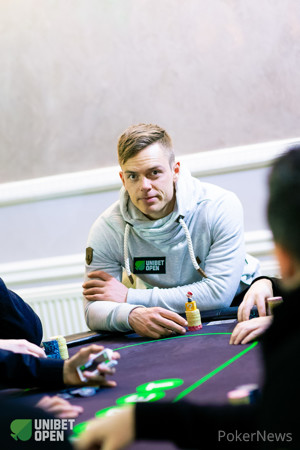 Maxime Canevet had been down to 45,000 and appeared among the recent casualties a few minutes prior to the dinner break, while Evangelos Bechrakis continued his rise on Day 2.

Jorstad had jammed out of the big blind with :::As:::Jd and Carmen Zainescu in the small blind called with :::5x:::4x after prior action on the table already. The board came :::Kd:::Qh:::Qs:::Qd:::6s and the ace-high was good enough for the Unibet Poker ambassador.

At almost the same time, Andrei Jambor had tabled the winning hand with :::Ad:::Jd one table over on the river of a board :::Jh:::6s:::6c:::8c:::5s and Manolea mucked her cards before leaving the tournament area.

A Look at Team Unibet