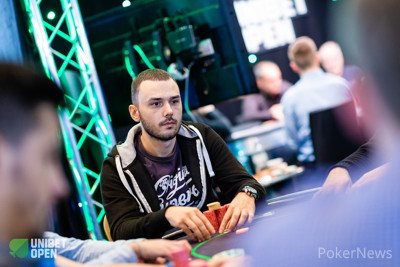 One hand after the double up of Espen Uhlen Jorstad, Alexandru Palievici three-bet jammed his last 270,000 over a 50,000 open raise by Traian Bostan and the latter quickly called.

No help appeared on the {10c}:::5c:::2h flop nor the :::9h turn, and the :::2c on the river ended Palievici’s run in 9th place for €7,320. With that elimination, the official eight-handed final table has been determined and the chips are now being bagged and tagged. A recap of today’s action is to follow.