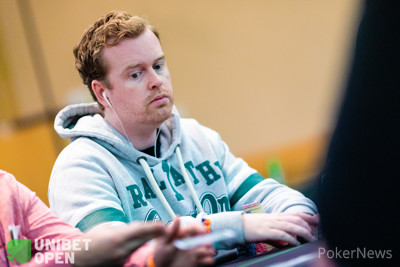 A completed board of :::7h:::7d:::6s:::4c:::as was spread across the felt and Przemyslaw Zielinski checked to Kristian Aksnes. Aksnes threw in a bet of 12,400 into a pot that already had around 40,000 in the middle. Zielinski check-raised all in for 60,500 which got a reaction from Aksnes.

"Wow!" he exclaimed as he bounced up from his seat. "Am I supposed to fold this? I flopped a full house!" Aksnes couldn’t make the laydown and Zielinski turned over :::ac:::ad for the best full house. Aksnes showed his :::6h:::6c for a smaller full house and within two hands, the majority of his stack disappeared.

"I hate poker sometimes," Aksnes continued. He still has a stack in front of him and there is still a full level before the night concludes.