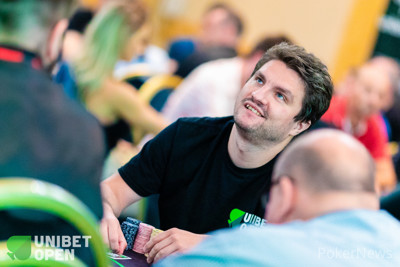 Another flight is in the books as Day 1b of the Unibet Open Malta €1,100 Main Event has concluded after 10 levels of poker. Another 165 players walked through the doors of the InterContinental Hotel and Casino Malta but only 66 will move on to Day 2 once the dust settled. That brings the total number of entries to 327, the largest Unibet Open Malta to date.

There were a few players who made a late charge for the chip lead in the closing hands of the evening but it was Christopher Heidelbacher from Romania who topped them all with 243,000 chips. Heidelbacher was trading with Angelo Tarallo who finished not far behind with 223,500 chips. In one of the last hands of the night, Tarallo scooped a pot well north of 120,000 chips from Peter Kaae with pocket aces – one of the only times they held up in the last level.

While it remains to be seen what happens in flight 1c, Heidelbacher will most likely hold the overall chip lead after the three starting flights. With over $30,000 in career tournament winnings in the last couple of years, all but one of his cashes have come in his home country. Heidelbacher will also be looking to top his largest score of over $16,000. A couple of other big stacks who had successful days were Petter Kaarstad (188,500) and Deivis Rinkevicius (187,500).

The action got underway for Day 1b at noon local time and tournament organizers were expecting a larger field than Day 1a which attracted 113 runners. It was clear that more players were in the building and the total entries quickly grew throughout the first few levels. Late registration remained open until after the dinner break but there was also Day 1c (a turbo flight) taking place for any of those wishing to re-enter.

Many more Unibet Ambassadors took to the felt today including Alexandre Reard (113,500), David Lappin (46,000), Espen Jorstad, Dara O’Kearney, and Monica Vaka. Unfortunately, the latter three failed to move on through this flight. Today was also the day that the Unibet Poker Twitch streamers tested their luck at the live format and a couple of them were able to make it through. Phil ‘syrinxx’ Schonebaum (106,000), and Yoan ‘ToD’ Merlo (61,500) will return with chips on Day 2.

There were 49 players who took their shot at running up a stack in a mere few hours on Day 1c with the levels reduced to 20 minutes. Many of those that were eliminated on Day 1a made their way back into the mix in hopes of finding a bag for Day 2. That event is still currently running and those players that advance will be posted upon completion.

All of those that advanced from the starting flights will return to the tables tomorrow for Day 2 which begins at 12 pm local time. The blinds will resume at 1,000/1,500 with a 1,500 big blind ante. The next goal for everyone will be to reach the money, which likely won’t happen until later in the day. The blinds will continue at 60 minutes in length and the scheduled plan is to play down until the final table.

Follow along with the PokerNews live reporting team for all of the action straight from the tournament floor.

Last Four Hands of the Night