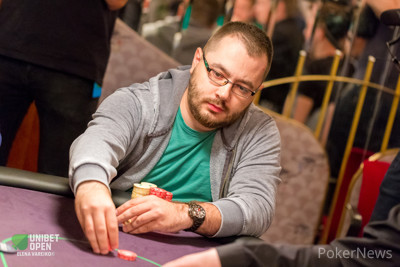 After Thomas Ardai had opened from middle position, Sigurd Carlsson three-bet to 175,000 on the button. Ardai four-bet shoved for 1,030,000 and Carlsson called it off after mere seconds.

It was the mother of all coin flips and by far the biggest pot of the tournament yet. Ardai was the one at risk and needed to improve but missed on the :::9d:::5c:::9h flop. The :::4h on the turn didn’t help the Romanian either and the :::7d on the river bricked as well.

The 2 million-plus pot went to the man from the Faroe Islands, who is now the overwhelming chipleader.