The Unibet Poker Belgian Championship is back next week in the lovely seaside resort of Blankenberge. The popular festival will run from August 31 to September 4 at Unibet Casino Blankenberge and features a €550 buy-in Main Event as well as multiple satellites, a two-day Mystery Bounty Event, #QueenRules Ladies Event and several No Limit Hold’em turbo tournaments.

More than 83 Unibet players have already qualified for the Main Event online with several more set to win their seat in the last qualifier which is taking place tomorrow (Thursday, August 25.)  Players are also welcome to register online via the Unibet Poker client. 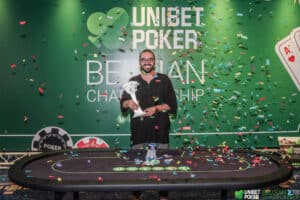 Among those who will be competing this year are Belgian poker pro Christophe De Meulder and his twin brother Matthias. Christophe won the event in 2018 for €38,290 after defeating a 438-entry field.

Owing to the pandemic it’s been nearly three years since the last Unibet Poker Belgian Championship so a big turn-out is expected for this year’s festival which is a highlight of the Belgian poker calendar and won Event of the Year at the 2018 Belgian Poker Awards. Once again, Unibet Open tournament director and former November Niner Kenny Hallaert will run the event. There will also be full coverage of the event on both www.pokercity.be and www.pokercity.nl.

For the first time, the Championship will also include a €50 Live Casino event featuring different rounds of Blackjack & Roulette. 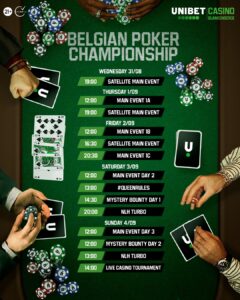 Day 1a of this year’s Championship Main Event takes place at noon on September 1 with Day 1b starting the following day at the same time. The turbo Day 1c flight gets underway later on at 8.30pm. Players who don’t make it through Day 1a or 1b will be allowed to re-enter again on Day 1c.

The tournament boasts a fantastic structure with 50,000 starting stack and 45-minute levels for the first two start flights, as well as on Day 2.

Nataly Sopacuaperu, Unibet Open’s Head of Events, said: “We’re thrilled that so many players have managed to qualify online for this year’s Unibet Poker Belgian Championship. Around 70 players will be competing in Blankenberge after winning their €550 Main Event seat which is such great news. This year’s event promises to have a real buzz around it and will be bringing together the very best players in Belgium as well as players from all over Europe. It’s going to be a great reunion.”

The inaugural Unibet Poker Belgian Championship took place in 2016 when Belgium’s Fabrice Lestrade beat a 407-entry field to win the top prize of €40,107. 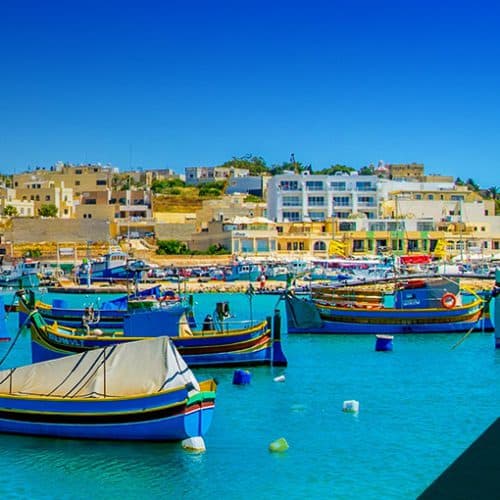