Who Will Win the 2016 Unibet Open Bucharest Main Event Title?

Who Will Win the 2016 Unibet Open Bucharest Main Event Title? 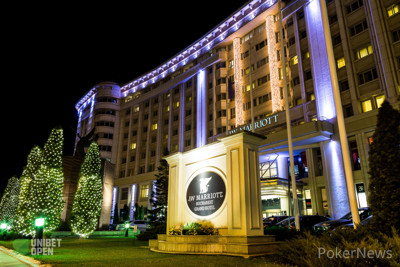 In 90 minutes from now at 12 p.m. local time, the stunning JW Marriott Bucharest Grand Hotel welcomes back the last 15 hopefuls out of a record-breaking 603-entry strong field of the inaugural €1,100 Unibet Open Bucharest Main Event. Throughout the previous three days of the action-packed festival, the Grand Ballroom was bursting with players, but today is the day everyone has been looking forward to.

One other name stands outs in particular among the other finalists: Dan Murariu. The Romanian knows exactly what it means to win a Unibet Open Main Event after emerging victorious in Bulgaria (2010) and on Saint Martin (2012). Murariu made it through with 880,000 and may become the first player to make it three wins on the popular tournament series. Eight of the last 15 players are from Romania and also battle for a €2,000 package to the next stop in London as part of the local Pokerfest promotion. This includes Cristian Dan (1,270,000), Adrian Stefan Calusaru (910,000), Cosmin Cimpeanu (635,000) and Traian Bostan (570,000).

The action of the Main Event resumes with level 23 and blinds of 20,000-40,000 and a running ante of 5,000. A live stream of the feature table including hole cards will be available on a half hour security delay and the PokerNews live reporting team will be on hand to provide all the key hands until a winner is crowned.

There are also 15 players remaining in the €2,200 High Roller with the top nine spots paid, Sam Grafton is leading the field of hopefuls with several notables still in. The winner can look forward to a payday of €36,300 and both events will play down to a winner today.

The Final Table Line Up