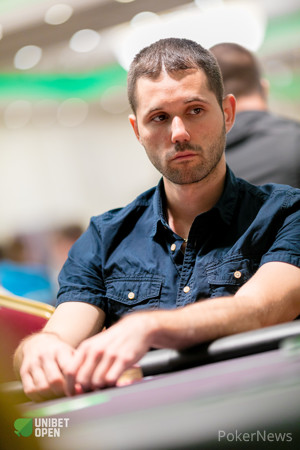 2015 Unibet Open Glasgow Main Event champion Daniel Chutrov found :::As:::Ad in early position and he raised to 160,000. It folded to Anton Vinokurov on the button and he woke up with :::Qd:::Qc. Vinokurov three-bet to 450,000 and it folded back to Chutrov. Chutrov called the three-bet to see the flop.

The flop came down :::Qs:::6c:::5d and Vinokurov took the lead with a set of queens. Chutrov checked to Vinokurov and the chip leader checked behind.

The turn was the :::6h and Vinokurov improved to a full house. Chutrov was drawing to only two outs when he fired a bet of 375,000. Vinokurov peeked at his cards again before calling the bet.

That means that we have lost Daniel Chutrov and he will not be a two-time Unibet Open champion just yet.