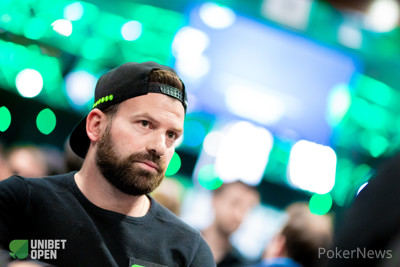 The 2019 Unibet Open London £990 Main Event kicked off at 11 am GMT today, as Day 1A got underway. The starting flight ultimately drew in a crowd of 136 entries, with just 37 going the distance.

After 11 levels of 60 minutes each, the 37 remaining players bagged up at "The Vic" and it was Unibet’s very own Alexandre Reard who claimed the overnight spotlight with a stack of 360,000.

It was a very successful day all in all for the Unibet ambassadors with all but one who took to the tables progressing to Day 2 including Monica Vaka (147,000), Belgian ambassador Charlotte Van Brabander (107,500) and David Lappin (45,000).

Irishman Lappin managed to achieve a double up right at the last when he held with pocket aces against ace-king to provide hope.

Their fellow ambassador Dan Murariu departed during level 9 however, after the Romanian struggled throughout the day having negotiated a short stack from the off, and ultimately succumb to the pressure of the increasing blinds.

2017 Unibet Open Bucharest High Roller champion Olvedo Heinze was among the chip leaders at the dinner break but faded afterward and hit the rail.

Jamie Nixon found a fantastic fold with a full house holding pocket sixes in the early action and was shown he made the correct call by his opponent who had rivered the higher house holding ten-eight. But Nixon was unable to use his lifeline and departed during level five.

The Main Event action continues on Friday, May 24 as Day 1B kicks-off at 11 am, followed by the final starting flight, Day 1C Turbo, at 8 pm.

Join us back here at PokerNews for continued coverage from London!