Esports Players in the Building

Esports Players in the Building 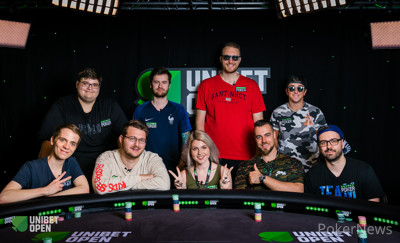 Day 1b is the day where all the Unibet Ambassadors play the Main Event, with a few exceptions. Sophia White and Daiva Byrne all played yesterday so they were able to play the #QUEENRULES Ladies Event today.

Unibet Poker Ambassador Fredrik Bergmann is seated at the table with Scott McMillan. McMillan is the founder and co-owner of Method, originally a World of Warcraft team that has turned into an industry leading esports organization. McMillan is the defending champion of the Esports Battle Royale after winning his second Battle Royale in a row earlier this week. He also won the Tag Team event here in Bucharest alongside Rauno "Estonian Jesus" Tahvonen, who’s also in the Main Event.

Thijs Molendijk and Nathan Schmitt also played in the Esports Battle Royale earlier this week and were also spotted in the Main Event already. Schmitt is at the featured table which is streamed and can be watched under the "Live Stream" tab at the top of the page.