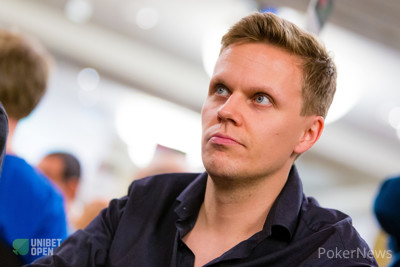 It was indeed a record-breaking day at the Unibet Open Bucharest festival at the JW Marriott Bucharest Grand Hotel, as once again the Grand Ballroom was bursting with all tables being used for Day 1b of the €1,100 Main Event as well as High Roller Satellite and a €220 Turbo Bounty Event.

After the registration had closed, a massive field of 367 entrants took part on Day 1b to boost the overall attendance to 603 participants, shattering the previous record of 460 entries to create a prize pool of €584,910. The payouts will be announced when the action resumes as of 12 p.m. local time for Day 2 and 156 hopefuls are still in contention.

After 63 players had bagged up on Day 1a, another 93 made it through today and local player Gabriel Gavrila amassed a monster stack of 432,000. He is followed by Alexandre de Zutter, who consistently built his stack over on table one and even cracked the aces of Mihai Manole with ace-king to bag up 382,000. Dan Ionut Hila follows in third place with 291,500 while other big stacks include Eugen Chiva (267,000), EPT12 Grand Final €25,750 High Roller champion Alexandru Papazian (232,500) and Jozsef Liszkovics (219,000).

Plenty of other familiar faces of the international poker circuit took the felt as well but failed to bag up chips. Ian Simpson joined the rail in the first two levels already and two-time Unibet Open champion Mateusz Moolhuizen doubled two shorter stacks after coming back from dinner before getting the remaining five big blinds in with queen-four suited, Andrei One dealt the final blow with ace-king.

Gaelle Garcia Diaz had a kicker problem with ace-ten versus ace-king and Peter Harkes shoved with pocket aces into a straight to join the rail as well. Florin Ionut Ilies had a huge double early on with quads sevens, but ran out of chips on the same table as de Zutter. Daiva Barauskaite’s ace-jack faced the isolation of Apostolos Bechrakis with jack-eight suited and the Greek made a runner runner flush over on the feature table, while popular Irishmen Gary Clarke, David Lappin and Dara "Doke" O’Kearney were all eliminated as well.

In the last few hands of the night, former big stack Yossef Shmuel Shmerling got it in with ace-queen against ace-jack on a jack-high flop and failed to improve. Andrei One joined the rail in spectacular fashion after bluffing off his chips with queen-four suited and a busted gutshot, Erno Suominen looked him up with ace-deuce suited for aces and sixes.

When all was said and done for the night, the 93 survivors bagged up and will be back for level 12 and blinds of 1,500-3,000 with a running ante of 500. Another eleven levels of 60 minutes each are scheduled for Day 2 to cut down the hopefuls considerably, about half of the remaining players are expected to cash in the Main Event. Saturday will also feature Day 1 of the single re-entry €2,200 High Roller as well and today’s Satellite gave away six entries, the tournament kicks off at 4 p.m. local time.

Make sure to follow the PokerNews live updates to find out who makes history at the record-breaking inaugural Unibet Open this weekend in Bucharest!