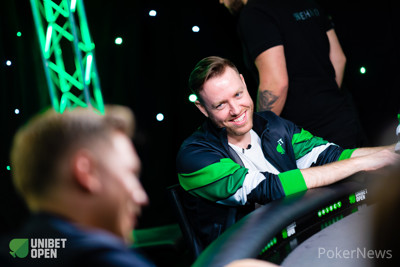 The final starting flights of the 2019 Unibet Open London £990 Main Event have come to their conclusion with a combined 104 players progressing.

Today’s action saw 237 entries take part in Day 1b with 83 battling it out in Day 1c Turbo.

The biggest hand of the day occurred just moments before the final break in level 10 when ‘ONSCREEN’ turned a less than 1% chance of winning into a 320,000 stack. Shannon raised from under the gun with ace-jack and saw Henri Jantunen defend his big blind with pocket-jacks. Jantunen check-called c-bet from Shannon on the jack-six-four flop, and they saw the ace-of-hearts hit the turn. Jantunen opted to check-raise a 15,000 bet from Shannon to 45,000, after two minutes in the tank, the latter moved all in for 150,000.

Jantunen snap-called and revealed his set, with Shannon extremely unlucky to be behind and on the verge of elimination holding two pair.

But with an audience watching on the live stream, the table roared in shock after the ace-of-clubs hit the river to propel Shannon into the lead with the runner-runner higher full house to win the massive pot.

Elsewhere, Unibet ambassadors Ian Simpson & Espen Uhlen Jorstad both fell from the 1b field, but Simpson was able to make amends.

Jorstad was eliminated in the penultimate level when he three-bet all in from the big blind after an open raise from the button, only to see his ace-four no match for ace-jack. Jorstad had also missed out on the chance to enter Day 1c Turbo, whereby his teammate Simpson was progressing steadily. ‘Iany’ as he is known to his Twitch following, lasted all 11 levels and made sure he would return for Day 2 with a 90,500 stack.

Peter ‘Suntouch’ Logan, Andrew ‘TidesofTime’ Biessener, Melania Myloti,and Mario ‘RaptorDaRaptor’ Joos were not so lucky and were unable to progress.

The Day 2 action from ‘The Vic’ will begin at Noon local time as the players battle for a place in the money spots and a seat at the final table.

Join us back here at PokerNews then for continued coverage from London!