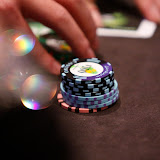 As Day 1b draws to a close, the entire field has now had a chance to test themselves against 229 others per day, with just a fraction heading forward to the second day.  Of course, a chip and a chair are famously enough to win a poker tournament, so the many short stacks heading back to take a shot at the prizes are still definitely in the running.  However, it’s players like Mats Rahm, Claus Nielsen and Espen Kristoffersen who are ending the day in pole position, as it were – stacks to rival the top finishers of the first flight, all of these, and possibly one or two more who used the last four hands of the night which are played with no spectators to rocket past the 100k mark.

The day took much the same route to player elimination as the first flight – cagey at first, with a gradual acceleration, then after the dinner break a lot more action, culminating in a final level slowdown, when the big stacks were playing each other and the short ones were picking their moments.  An aggressive bunch, most of these Day 1b players, and when they’re added to the 51 remaining from yesterday it should be an exciting mix.

The prizepool has been set – a huge €172,500 for first, with those reaching the top 54  guaranteed at least €2,070.  Expect fighting to be fierce as the field is whittled down to the final table when play resumes at 2pm tomorrow; follow the live blog from the first hand, and the livestream of the feature table from 4pm.