Huxley and Kevmath on the Rail

Huxley and Kevmath on the Rail 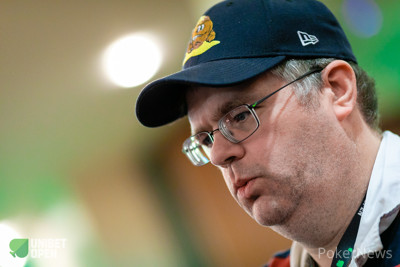 Phillip Huxley jammed first to act for what appeared to be 42,000 and Dara O’Kearney in the small blind asked for a count, then reshoved to isolate.

Kevin Mathers, to most simply known by his online nickname "Kevmath" as the ultimate source for all things poker on social media, also busted shortly after. He got it in with the :::Ah{10d} and Richard O’Neill dealt the final blow with :::Ac:::Qs. O’Neill flopped a queen and Mathers missed out on a gutshot to bust just before the blinds went up.

Nordli Busts in Three-Way All In