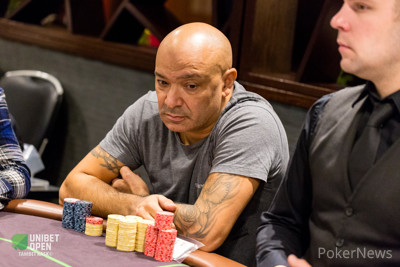 Arno Simon raised to 9,000 in middle position. Wenbin Chen three-bet to 22,000 from the cutoff. Terry Jordon cold-called from the small blind and Simon called as well.

The river was the :::4h and Jordon checked again.

Simon had Jordon covered, and the Brit was facing a decision for his tournament life seven places before the bubble. It was 152,000 to call for Jordon, who thought for nearly four minutes before open-folding :::Ah:::Qc.