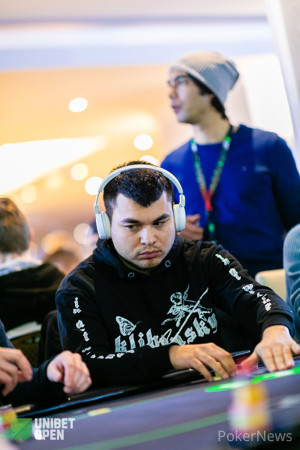 Sergiu Covrig had opened and picked up a call by Espen Uhlen Jorstad in the cutoff. Tom Wiggers then three-bet to 21,000 in the small blind and Covrig folded, while Jorstad called. On the :::Jh:::7c:::6c flop, Wiggers continued and Jorstad came along to create a pot of nearly 100,000.

The :::2s turn brought a second barrel worth 35,000 by Wiggers and Jorstad called once more. On the :::7s river, Wiggers emptied the clip and moved all in for the last 82,000. Jorstad asked for a count and immediately apologized that it will take him a while to make a decision. Three minutes passed and Jorstad made the call, having his opponent barely covered.

"Good call, I guess," Wiggers said with a smile on the face and reluctantly showed :::Ac:::Kd. Jorstad turned over his :::9c:::9d and skyrocketed up the leaderboard.