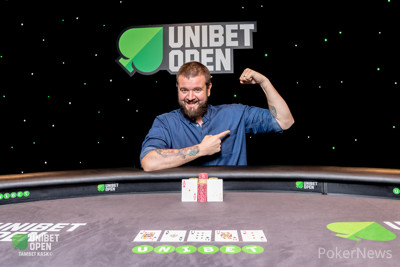 The five-day Unibet Open Copenhagen event got off to a surprising start with the most unlikeliest of players romping home to victory. Swedish Counter-Strike: GO star Kim PapaDrayich won €5,000.

After the match, he admitted: “I didn’t think I would beat these guys, they are much better than me. I decide to play conservative and take my time, if I was playing with friends at home I would have been much more aggressive, which would have been a mistake here.”

The win was even more impressive given this was PapaDrayich’s first appearance at a Unibet Open Battle Royale SNG but his inexperience didn’t hold him back from taking a commanding chip lead and beating Scott "Sco" McMillan – who won €3,000 – heads-
up.

“Sco has such good table presence, it’s quite intimidating, but those sunglasses hide beautiful eyes” PapaDrayich joked with his opponent as they stood side-by-side speaking to the media “I had a good chip lead and just needed to focus on my game”.

German Twitch superstar Alan "Hotted89" Widmann was the reigning champion going into the Battle Royale, but he could not defend his crown and busted in 5th place. “I put a lot of pressure on myself, not only as champion coming into this, but also because Viktor Blom has been giving me some really good advice and I didn’t want to make any stupid mistakes," Widmann said afterwards.

The Unibet Open Battle Royale has developed a friendly but competitive edge as some of the players have played multiple times together, including an SNG in King’s Casino Rozvadov last week and the Unibet Open London back in February.