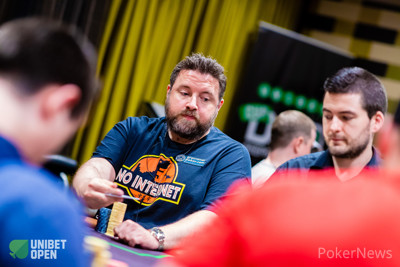 Jeff Kimber checked from the big blind with the flop down :::jh:::7h:::2s and saw Pavlos Xanthopoulos bet from under the gun.

Kimber made the call, and the turn revealed the {10c}. Kimber once again check-called a bet from Xanthopoulos, this time for 4,500.

The river card fell the :::4d, and Kimber checked for the third time. Xanthopoulos fired his third barrel worth 11,000, and Kimber thought for 30 seconds before he raised to 21,000.

With the decision back on Xanthopoulos, he went into the tank and needed close to a minute before he gave up and folded.