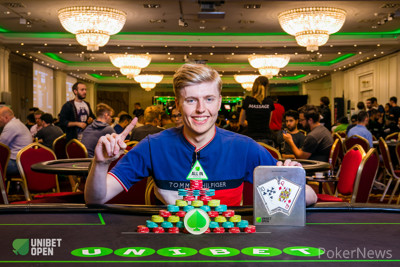 Valeriu Rosca moved all in from early position as he pushed his last 60,000 over the line. One seat over sat Toby Locke, who already won a trophy this week, and he moved all in as well for about 125,000. The rest of the players folded and they opened up their hands.

It was a classic race and the dealer started to spread out the :::Kd:::5s:::Qc board. Locke took the lead and left Rosca with just two outs. The turn was the :::5c and the river the :::Qh and Rosca wasn’t able to hit. Locke raked in the pot and Rosca walked off to the rail.