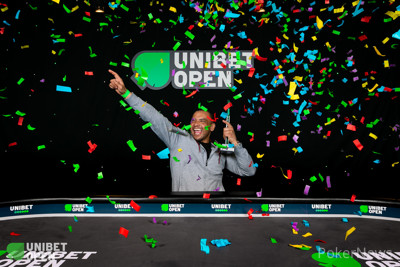 After an epic heads up match where Martin Olali was on the ropes for much of the time, he managed to claw back into the lead, and finally take it down over Steven Vollers. Olali survived 294 runners from all three Day 1s, including a 4-hour bubble on Day 2, before spending much of the final table short stacked. He still managed to grind it out and finally took it down with a pair of jacks.

The story of the day was all about Olali. He was short-stacked through much of the final table, and all in for his tournament life more than once against the much bigger stack of Vollers during heads up, but if he didn’t have the best of it when the money went in, he got there to survive.

He lasted long enough to get to the stage when they were both short-stacked, and then managed to take it down when his jacks held against the king-eight of Vollers to take down the €64,110 first prize. The victory put Olali over $300K in lifetime earnings, but during the heads up match, he actually said he was more interested in the win and the trophy than the money. He got both, and the smile on his face in the winner’s picture says it all.

It was a star-studded affair on Day 3, with twelve players taking their seats at the start of the day. Scottish phenom Niall Farrell came into Day 2 with a very short stack but managed to run it up in typical "Firaldo" fashion to start in the middle of the pack. After Hardcastle was the first to exit on Day 3, Farrell’s run also came to an early halt when he got sixes in against the big slick of Jamie Nixon but couldn’t hold. The final table was set when Jason Tompkins got his ace-seven in against the eventual runner-up Steven Vollers’ ten-nine, but Vollers spiked a nine on the river to eliminate Tompkins.

Alex Hendriks led the final table to start, with Jamie Nixon in second place. Nixon had a harsh run at the final table, ending his day in 8th place for €7,740. Hendriks had a better run, lasting until third place for a score of €27,600. Unibet Ambassador Espen Jorstad made the final table with one of the shorter stacks, but still managed to play that to a 6th place finish for €12,100. Last year’s Irish Poker Open champion Weijie Zheng made it as far as 5th place for a cash of €15,730.

It all came down to an epic heads up battle between Steven Vollers and Martin Olali. Olali came into heads up a huge chip dog, but managed to hold or hit when he had to and survived long enough to find his spot with jacks against the king-nine of Vollers, and Vollers couldn’t find enough help to pull it out. Vollers had a deep run at Unibet Open Sinaia last years and also finished sixth in the Unibet Battle of the Champions, but had to settle with €40,020 for second place.

That’s a wrap from Unibet Open Dublin for 2020. The next stop for Unibet Open will be Tallinn in May, and qualifiers are already running on Unibet Poker. PokerNews will be there again to bring you the action from the Estonian capital.