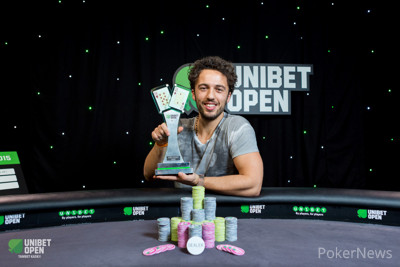 We caught the tail end of a massive hand between Mateusz Moolhuizen and Vishal Maini, which left the two-time Unibet Open winner with nothing after the dust had settled.

According to Maini, the hand went as follows. Maini raised in early position and Moolhuizen defended his big blind. On the :::Kh:::Kc:::Qh flop, Moolhuizen checked, Maini bet 5,000 into a pot of 19,000 and Moolhuizen called.

On the :::3s river, Moolhuizen thought for a while before shoving all in around 80,000. Maini snap-called and had Moolhuizen slightly covered.

It was a case of ill timing for Moolhuizen, who ran into the stone cold nuts. With the scalp, Maini skyrocketed to 290,000 and Moolhuizen quickly left the tournament area.