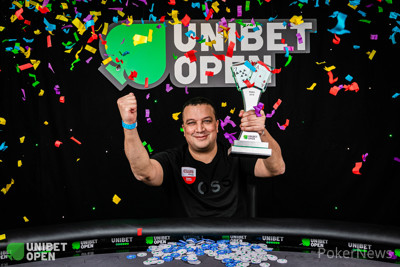 Somehow the final day of the Unibet Open Paris Main Event proved to be both a rollercoaster and a procession, as start-of-day chip leader Omar Lakhdari finally saw off Quoc Dung Le heads-up to win the title and €89,070 first prize.

The 480-player field is the biggest Lakhdari has topped in his poker career, one which has seen him amass over $1.5m in lifetime earnings.

After coming into the final day as a commanding chip leader, two early eliminations saw Lakhdari threaten to have things wrapped up within a couple of levels.

But the likes of Le and eventual third-place finisher Vladimir Nex made it difficult for him in an enthralling period of three-handed play that featured no fewer than five doubles – two in back-to-back hands – before Nex bowed out in third.

Le’s final table run to heads-up is notable and commendable, not least because yesterday his stack was as low as three big blinds – in the big blind! He ran that short stack up yesterday and looked in command for periods today, but in the end, he would have to settle for second as Lakhdari wrapped up his biggest ever poker result on French soil.

It was an incredible start to the day, with three eliminations in the first nine hands. Hakim Chniyat fell in the first hand, losing a flip with sevens against the ace-king of Lakhdari, before Alexey Dmitriev joined him, also at the hands of Lakhdari.

Dmitriev got it in even better than Chniyat did, with his pocket fours well ahead of Lakhdari’s pocket deuces. But a deuce in the window saw Lakhdari send a second player to the rail in quick succession.

Giuseppe Zarbo had started the day as the short stack, and laddered two spots before a three-way confrontation saw him eliminated, when his jacks ran into the ace-queen of Alexandru Danes, but more importantly the pocket aces of Quoc Dung Le.

Michel Leibgorin and Vladimir Nex would trade doubles, before Malik Corbin got in on the action, also doubling through the French veteran. Lakhdari would add another victim, flipping Leibgorin from the tournament with ace-queen against sixes, the board double-pairing to counterfeit Leibgorin and eliminate him in sixth place.

Le was making up ground, eliminating Alexandru Danes in fifth place, as was Nex who sent Corbin to the rail in fourth.

The final three players seemed equally matched, with Lakhdari, Nex and Le all taking turns in the chip lead as the trio traded doubles between them. The pivotal hand came when Le turned a ten holding ace-ten against the nines of Nex, and he would depart soon thereafter.

Le would take the chip lead into heads-up, extending it further before Lakhdari doubled back up. The duo went on a short dinner break, but when they returned, the chips went in one direction and Lakhdari closed out the most prestigious victory of his career.