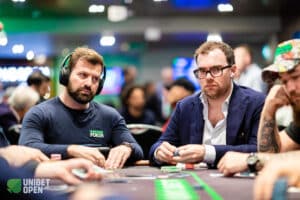 In addition to the prestigious trophy, this year’s Unibet Open London champion will walk away with a record £80,200 first prize. A total of 63 players will be paid out, with a minimum cash worth £1,800.

The festival is taking place May 22-26 at the Poker Room at the iconic Grosvenor Victoria Casino on Edgware Road. It’s the Unibet Open’s eighth visit to the UK capital.

There are 11 60-minute levels scheduled for today unless the final table of nine is reached earlier.

The Unibet Open Live Stream kicked off on Twitch and facebook at 14:30 BST. Also on today’s schedule are the £500 Unibet DSO, the £110 #QUEENRULES Ladies and the £220 Turbo Bounty. There are a dozen tournaments on the schedule overall.