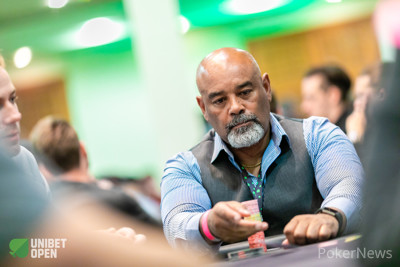 Over on the outer table, Robert Franks was all in for 141,000 and big stack Joseph Ellis looked him up to set up the following showdown:

Franks flopped well with the :::Qc:::5d:::2d, improving to a pair of queens. The :::Kd on the turn was even better as he now held top two pair. However, it was all for nought, as the {10d} river restored the preflop order with the nut straight for Ellis. Franks was eliminated in 15th place and takes home €4,750.