Sinclair Triples Up With Magic River

Sinclair Triples Up With Magic River 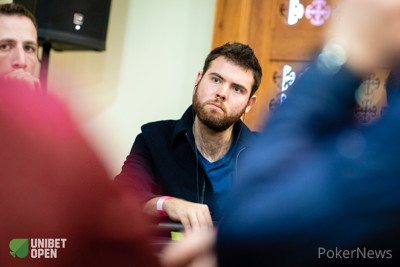 Guillaume Dupuy raised from the cutoff and Jack Sinclair three-bet all in for 29,200 on the button. Mark Rink in the small blind gave it some thought and grabbed the all in triangle himself to move all in over the top. Dupuy called it off as the second-biggest stack to create a three-way all in,

"That’s not that bad," Sinclair said as he only needed an ace to secure a triple up. While the :::Kh:::9s:::3c flop and the :::7s turn were of no help, Sinclair indeed got there on the :::Ac river. His friend Feargus Murphy leaned over from the next table and joked "some guys are just too lucky," and the 2018 WSOPE Main Event champion Sinclair jumped back to an average stack in the penultimate level of Day 1a.

Hemsworth Jams at the Wrong Time