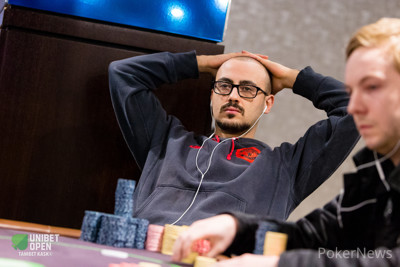 With 335,000 in chips left, Tamer Kamel shoved from early position. Pavlos Xanthopoulos called in the small blind, leaving himself with 650,000 behind.

In the big blind, Anton Kuznetsov moved all in for 1,800,000 total, putting the decision back on Xanthopoulos. The Greek thought long and hard before surrendering his hand, which turned out to be a wise decision.

Kamel was in a deep hole from the start and couldn’t dig his way out of it on :::Jh:::6s:::Jc:::Td:::Qs. He finished 12th and added £5,470 to his already massive lifetime winnings. Kuznetsov is now the new chipleader.