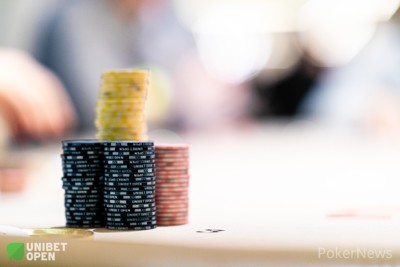 The chips are ready, and players are arriving for the very first Unibet Open of 2020. The year gets started for the Unibet live series at the Bonnington Hotel in Dublin on February 26th with the first day of the festival featuring the ever-popular Battle Royale invitational tournament, as well as Day 1 of the two-day €2,200 High Roller.

Additionally, a new tournament is on the books for this series, the €225 Unibet Open-er with 20,000 chips to start, and 30 minute blind levels. The two day event has registration open for 8 full levels on Day 1, and remaining players at the end of the night will return on Thursday to play down to a winner. Players also have another satellite chance Wednesday evening at 7:30PM when €165 buys them a shot at a Day 1 entry for the Main Event. Further satellites for the Main run Thursday and Friday.

The €1100 Main Event gets underway on Thursday with the first of three day 1s. Day 1a kicks off at noon on Thursday giving players their first chance at the €250,000 guaranteed prize pool. Two more Day 1s run on Friday, with a regular Day 1b starting at noon, and a turbo Day 1c starting at 9PM. Main Event players start with 30,000 chips, and play 1 hour levels on Day 1a and 1b, with the Day 1c Turbo flight running 20 minute blinds.

The field for the series looks to be star-studded as well. As is usually the case, the field will be headlined by Unibet Ambassadors Dara O’Kearney and David Lappin. The pair are also hosts of the Unibet sponsored, GPI award winning podcast The Chip Race. In addition to O’Kearney and Lappin, Espen Jorstad, Alexandre Reard, and Monica Vaka round out the Ambassadorial team here in Dublin.

Along with the Ambassadors, Swedish poker legend Viktor “Isildur1” Blom will be at the Bonnington looking for a Unibet Open title. Two-time winner Dan Murariu will also be in attendance, along with Mateusz Moolhuisen, influencer Dehlia de Jong, Unibet Belgian Ambassador Charlotte Van Brabander, and qualifiers Deivis Rinkevicius, Philip Huxley, and Domantas Klimčiauskas.

All the action will be streamed on the Unibet Open website, Twitch, Youtube, and Facebook, and as usual, the inimitable team of David "Davitsche" Vanderheyden and Henry "GTO Commentator" Kilbane will be bringing you all the action starting with the Battle Royale.

The five days of action are already underway with the Unibet Open-er and a satellite to the High Roller already running. Day 1 of the High Roller gets underway at 6PM Wednesday, with the Battle Royale set to start at 7PM. PokerNews will be on the floor from the first hand of Day 1a of the Main Event at noon on Thursday, providing live updates in real time throughout the Main Event.