This was Unibet Open Dublin!

This was Unibet Open Dublin! 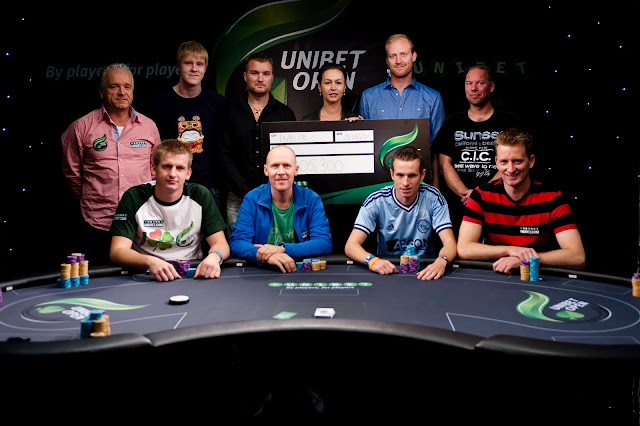 The third stop on this year’s tour saw the Unibet Open team descend on Ireland’s capital Dublin for the first time in Unibet history. The Citywest Hotel and golf resort just outside the city became the glamorous home for four days to our numerous online qualifiers as well as a strong-looking contingent of Irish players, all hoping to take down the coveted Unibet Open title and over €100,000 for first place. 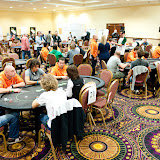 With four or more events scheduled to run every day between Thursday and Sunday, there was a huge amount of choice for all the players, including a raucously entertaining team event between some of the Dutch and Finnish players. With regular turbo events, a couple of Omaha events and even a ‘flip’ tournament (in the form of blind Omaha – which drew huge crowds!) there was enough to cater for every kind of player.

The biggest draw for the players, naturally, was the Main Event. The €1,500 NLH freezeout drew a considerable field of 260 runners with more players from the Netherlands than any other single country. Two Dutch success stories from recent Unibet Opens faced contrasting fortunes in the early levels. Mateusz Moolhuizen (Unibet Open Malta champion) was a very early casualty on Day 1a but Pim van Riet, who finished third in Barcelona, quickly became the chip leader after his aces held against a flush draw to double him up early on. From then on, van Riet would consolidate his huge stack, eventually finishing with 222,300, good enough for the chip lead at the end of Day 1a. 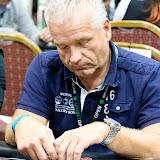 The Day 1b field was somewhat heavier on the big name pros than Day 1a. EPT Grand Final winner Pieter de Korver made an appearance, as did four WSOP bracelet winners: Jorg Peisert, Marcel Vonk, Scott Shelley and local hero and Irish Open champion Marty Smyth. On top of this, James Sudworth, Dara O’Kearney and Marvin Rettenmaier all also put in an appearance -although for the latter of these it would be nothing more than a cameo as the young German busted very quickly. Joni Joukimainen was among those who fared better than Rettenmaier – the Finn (who won the team event the day before) managed to finish the day with 95,000, well above average. Also above average at the end of Day 1b were Marty Smyth (70,800) and former Unibet Open winner Henri Ojala (57,400). But these stacks were all dwarfed by another Dutchman at the top of the leaderboard as Joey Vittali finished with 193,500 – going into Day 2 second in chips.

82 players came back for Day 2 on Saturday but with only 30 places being paid, it was going to be a battle as more than half our players would still be going home with nothing more than a story to tell their family and friends. The casualties came thick and fast early on, the talented Will Dorey among them as he ran Kings into George McKeever’s Aces. McKeever, a well-known local player, hit a rush of cards and suddenly found himself on over 200,000, up there among the chip leaders. Pieter de Korver had returned on the second day as a short stack and although he managed to score a few early double ups, it proved to be a false dawn – he eventually ran Jacks into John Gallagher’s Aces, ending the EPT winner’s dream of picking up a Unibet title to add to his trophy cabinet. 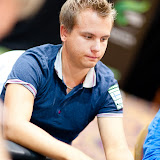 Unibet Open Prague winner Henri Ojala was looking to be the first player to win a second title and he got it in good with As-Kc against Dalil Masaud’s Ks-Js but the board ran out 5s-Qh-4s-2h-Qs making a flush for Masaud, and the Finn could only politely wish everyone good luck as he left the tournament. The big names continued to fall – Marty Smyth, the last bracelet winner in the field, was soon to follow Ojala off the stage, the number of Irishmen in the tournament dwindling significantly as the bubble approached.

Hand-for-hand, it took just a few minutes for the bubble to burst in a three-way cooler. Soren Knudsen had moved all in preflop with a short stack holding Ad-Qd before Boris Kuzmanovic reraised all in from the cut-off with pocket Kings – and then Sebastian Skuja called all in from the big blind as well with Aces! Kuzmanvoic had the other two players covered and when the board came 2s-6h-Ks-6d-Js, he eliminated both. Knudsen went out 31st while Skuja’s one silver lining was that he’d just made the money and picked up €2,340 for his efforts. 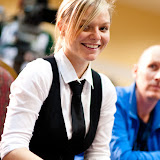 With money now guaranteed to all the remaining players, the lull in eliminations disappeared again as British player Paul Vas Nunes took over the chip lead and became the first player to break the million mark after knocking out Jonas Nielsen with Tens versus Nines. Vas Nunes increased his chip lead with two tables left. He flopped the nut straight with Q-T against Herve Decker’s second pair to push his chip stack up even higher – at one point he had double the stack of the next man.

Last Irishman standing John Gallagher was knocked out in 12th place when he ran Td-8d into Emil Pedersen’s Ad-Tc, an ace on the door making it a disappointing finish for the home nation, unable to get a player on to the final table. There was some disappointment for the Netherlands, too – Day 1b chip leader Joey Vitalli became the final elimination of Day 2, narrowly missing out on a final table appearance. He and Paul Vas Nunes both flopped top pair but Vas Nunes’ kicker was better – Vitalli hit the rail in 10th place and Vas Nunes and went into the final table with a big chip lead.

Tommy Almqvist hit a big early double up through Kuzmanovic with Aces against A-J to jump into second place but it wasn’t too long before we lost two of our short stacks, both of them Danes. First Thomas Svengaard lost a flip to Almqvist (A-K no good against 9-9); soon after, Morten Jensen’s J-T proved no help to him against Kuzmanovic’s pocket Fives.

Marcel Scherjon was eliminated next. He got it in good with pocket Aces, all in preflop against Emil Pedersen’s Tc-8c – but the latter made two pair, leaving Scherjon crippled. Scherjon soon moved in with fives but found Kuzmanovic dominating him with eights, and busted out in seventh place. Despite knocking out these two players, it was Kuzmanovic himself who would be out in 6th place. He pushed over the top with pocket Fives against a Vas Nunes raise. But pocket Fives proved to be unlucky once more as the Englishman called with pocket Tens. The 2-2-J-7-4 board changed nothing and the Croatian left with €19,000 as consolation. 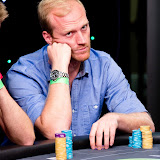 Emil Pedersen’s 3d-3c managed to hold against Peter Harkes’ Ad-Kd in a make-or-break flip which allowed the former to triumph and put Harkes out in fifth place. A couple of hands later and Pedersen was in the middle of the action once more, all in with Ah-9h against Almqvist’s 3c-3h, this time for a huge 1.6 million pot (with 5.2 million in play). This time Almqvist spiked a set on the flop and won the pot and Pedersen was left with just 60,000 chips to his name.

Incredibly this was the start of an amazing comeback as Pedersen doubled up four consecutive times as well winning a couple of substantial pots to go from a micro-stack to the chip lead with over 2.1 million. Meanwhile Almqvist had become short and ended up calling all in with Th-5h – actually ahead against Vas Nunes’ 9-2 offsuit, but a 9-7-5-9-Q board spelled the end for the Swede and he had to make do with €27,000 for his fourth place finish.

Pim van Riet, who came third in Barcelona, replicated his result here when he 4-bet shoved A-8 into Vas Nunes’ A-K. The Dutch player had a fairly quiet final table but his result here has put him at the top of the Unibet leaderboard with two online events and one live event to go. 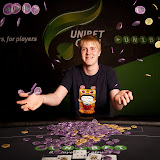 With that all wrapped up, we’ll see you next in Riga in December!

Bad Beat of the year