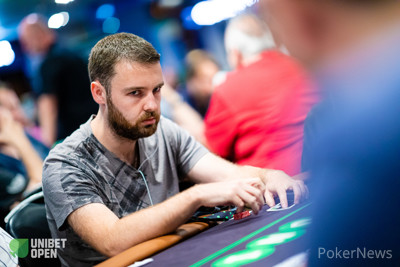 Davey called, and the turn card fell the :::8h. Vaisanen continued for 8,500 and Davey once again called, with the river revealing the :::jd.

Davey checked for the third and final time before Vaisanen put him to the test by moving all in for a pot-sized 30,000.

Davey himself only had 30,000 behind, and instant anguish covered his face.

Both players remained silent for close to two minutes, with Davey’s torment continuing.

But as the three-minute mark approached Davey folded and Vaisanen picked up the pot.