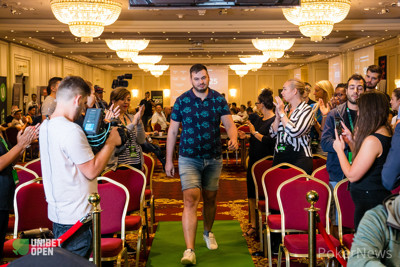 Amir Shomron raised for the third hand in a row with :::6h:::6c from the under the gun position. It folded around to small blind Florin Elisei who found :::Kc:::Qs and he thought about it. He called the bet and one seat over it was chip leader Anton Vinokurov who found :::Ad:::Jd. Vinokurov called and they went three-way to the flop.

The flop came down :::8s:::As:::9s. Florin flopped a flush draw while Anton flopped top pair. Elisei and Vinokurov both checked to initial raiser Shomron and he continued with a bet of 270,000. Elisei folded his flush draw, but Vinokurov called.