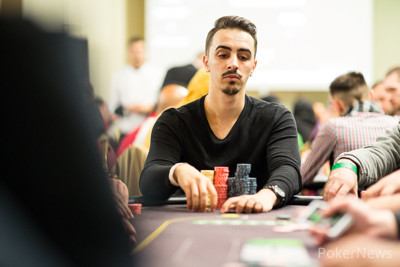 In two hours from now at 12 p.m. local time, the race to the money will commence on Day 2 of the record-breaking 2016 Unibet Open Bucharest €1,100 Main Event. After two starting days and eleven levels of 60 minutes each, the previous record of 460 entries was shattered as 603 players in total gathered at the stunning JW Marriott Bucharest Grand Hotel. The Grand Ballroom was bursting with action and 156 hopefuls bagged up chips to continue the challenge of becoming the latest winner of the popular tournament series.

Eli Heath (250,000) cracked the overall top ten and 2016 Unibet Open Copenhagen champion Joni Liimatta waits right behind him on his bid to win back-to-back events, having claimed 236,000. Alexandru Papazian, third on the Romanian all-time money list, has 232,500 while another player can make history here in Bucharest. While Mateusz Moolhuizen was eliminated on Day 1b, Dan Murariu got through the first starting day with a healthy stack of 160,000 and may become the first three-time champion of the popular tournament series.

Day 2 will feature another 11 levels of 60 minutes each with a break every two levels and a dinner break after the sixth level of play. The prize pool information will be released once the cards are back in the air and approximately half of the returning players are expected to share a portion of the stunning €584,910 prize pool.

The PokerNews live reporting team will be there to provide all the action until a winner is crowned on Sunday, and you can also watch everything unfold in the Unibet Open live stream on a security delay of half an hour as well.