Who Will Win the 2017 Unibet Open London Main Event?

Who Will Win the 2017 Unibet Open London Main Event? 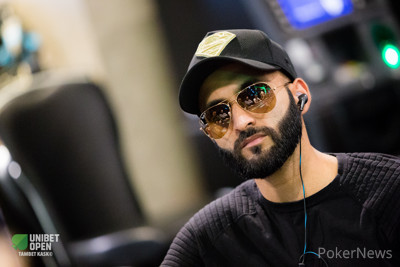 Thirteen players remain. Only one of them will walk away victorious tonight. At 12 p.m. local time, the third and final day of the Unibet Open London Main Event at The Poker Room in the legendary "Vic" in London will kick off. The players have locked up £5,470 already, but all eyes are on the first place prize of £71,950 and the prestige that comes with being an Unibet Open champion.

Francis Foord-Brown claimed pole position on Day 2 and will be leading the pack with 1,980,000 in chips. Russia’s Anton Kuznetsov is in second with 1,600,000. WSOPE Bracelet winner Pavlos Xanthopoulos, one of the biggest names left, sits in fourth with 1,175,000. They will be joined by Belgium’s Gerret Van Lancker (1,010,000), who’ll be looking to make his third Unibet Open final table.

It a very international affair, with no less than 10 countries represented in the final stages of this tournament. One of the international players is Rauno Tahvonen, affectionally known as "Ben" to his friends, who will be flying under the Estonian flag. Tahvonen (26), who lived in Australia for years, runs a non-profit organisation teaching people how to skateboard. Tahvonen qualified online for this event starting at just €10 and starts with 520,000

Another interesting player to watch is Tamer Kamel. The 32-year old Brit already amassed over $1,1 million in lifetime winnings and is one of the most experienced players left. Kamel sits at 405,000 and will be looking for a big comeback.

But perhaps the biggest story is the one of Bhavin Khatri. Khatri finished second to Dave Shallow in last year’s Unibet Open London, cashing £42,500. Khatri barely has time to play poker due to work obligations but took time off to compete here. The 32-year old Brit is looking to one-up his run from last year and will start the day with 1,150,000 in chips.

The 13 remaining players will be returning at noon local time in the following seating order:

Players will return in level 22 with blinds of 15,000-30,000 and a running ante of 5,000. The live stream will be shown with hole cards and will be on a delay. The PokerNews live reporting team will provide live action from the floor as it happens. Don’t miss any of the action on Sunday as we crown our new champion here in London!

Where is Martin Gallagher?