Who Will Win the 2018 Unibet Open London Main Event?

Who Will Win the 2018 Unibet Open London Main Event? 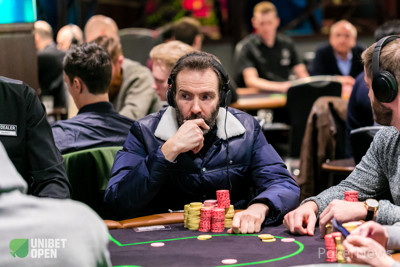 Ready, set, go for the final table of the 2018 Unibet Open London £990 Main Event at the Grosvenor Victoria Casino in the heart of city! After almost 21 full levels of one hour each, the Freezeout tournament has seen a field of 349 entries whittled down to just nine hopefuls, who already £6,300 locked up for their efforts. However, the lion’s share of the £314,100 prize pool is still up for grabs and the trophy as well as a payday of £65,580 awaits for the latest addition to the Unibet Open champion’s club.

UK’s Christopher Yong holds a commanding lead with almost two times as many chips as his nearest follower after bagging up 2,378,000. Most of Yong’s cashes come from tournaments in either London or Nottingham and the best result is a runner-up in the 2016 WPT Nottingham for £135,000. Second in chips is fellow countryman Oliver White with 1,325,000 followed by Jussi Vanhanen with 1,217,000.

Among the other four finalists with more than one million in chips is Laurent Polito. The Frenchman has already racked up scores in excess of $1.7 million on the live circuit and claimed five WPT National Main Event titles along with a WPT National High Roller victory to his name thus far.

Levels last 60 minutes each up until the final six, on which they will be shortened to 45 minutes. In heads-up, the level duration is set to 30 minutes. The action is set to resume at approximately 12 p.m. noon local time and the PokerNews live updates will be published according to the live stream on the Unibet Poker Twitch channel with hole cards displayed on a security delay of one hour, this will be cut down to around 30 minutes throughout the day.

More Players Are Trickling In

Action Underway on the Final Table