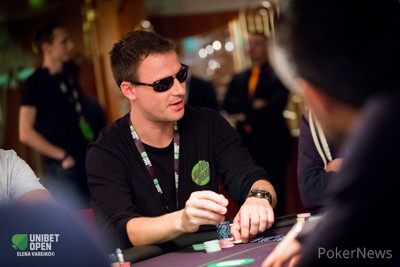 Michael Justesen limped in for 400 from under the gun. A couple of other players limped along and the small blind completed. In the big blind, Villu Metsur smelled weakness and elected to open-shove his stack of around 20,000, or 50 big blinds.

Justesen called, the other players folded and Metsur was caught with his hand in the proverbial cookie jar.

Justesen had Metsur covered and the Fin was suddenly at risk for his tournament life. The :::Td:::Tc:::4d flop was to no avail but the :::9d turn gave him an improbable lead in the hand. The :::As on the river swung it right back to Justesen and Metsur headed off for an early shower.