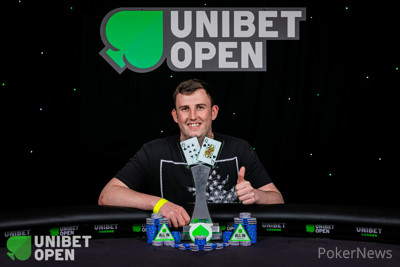 A record-setting 2019 Unibet Open Malta €1,100 Main Event has wrapped up to bring an end to this year’s festival. Alan Carr became a prime example of turning rags to riches as he defeated a field of 327 players to take home a prize of €53,400.

A deal was struck between the final three players which resulted in very level payouts but from what started as a €5 satellite ticket, Carr will walk away with his largest recorded cash in a live tournament. The British cash game player defeated Italian Luca Beretta in heads-up play to earn the extra €5,100 and the Unibet Poker trophy. Beretta locked up €48,550 for second place while Christopher Heidelbacher took home €44,880 for third place.

Carr can often be found playing online cash games or larger buy-in tournaments, but one day he accidentally registered a €5 step-satellite on Unibet Poker. He turned that into a €50 ticket which turned into a €250 ticket. Carr won his seat into the Unibet Open Malta, one of over 190 players this week. However, he will be the one walking away with the trophy held high as the doors close in the InterContinental Hotel and Casino Malta.

In the closing hands of the night, both Heidelbacher and Beretta were overcome by the ever-growing blinds. Heidelbacher found himself at risk for 11 big blinds against Beretta but couldn’t manage to hold on. A mere 20 minutes later, Beretta saw his last six big blinds evaporate at the turn of a card when Carr turned the only pair in an all-in situation.

*denotes a three-way deal was made.

There were 11 players that returned to the felt for the final day of the tournament and despite a couple of short stacks, it still took some time before the final table was reached. Alexandru Cinca and Sulaiman Sesay were the unfortunate players to make the early exit before the first break of the day.

Starting out the final table, Gedas Petrauskas came in as the short stack but was unable to pick up any hands to build his stack. Eventually, he called off his stack with pocket sixes but ran into the pocket eights of fellow short stack Henri Jantunen. No help on the runout meant Petrauskas was the first to exit from the final table.

It was a great start to the day for Matthew Ireland who looked to be running away with the chip lead but a couple of unfortunate hands turned the tide for the Brit. Running two pair into Tonio Roeder‘s set of jacks seemed to be the crucial hand of the final table and Ireland found himself handcuffed with around 15 big blinds. Roeder eventually finished him off in eighth place in a blind vs blind battle that saw Roeder flop top pair and hold on.

While the table continued to tip-toe around the short stacks, Jantunen patiently waited for some cards but they never came. He eventually flopped a pair from the big blind but it was no match for the larger pocket pair of Heidelbacher and the young Finn bowed out in seventh place. His fellow Scandinavian friend who brought some excitement to the table but also rubbed others the wrong way with his excessive tanking was next on the chopping block. Serdar Demircan made some moves on the final table that didn’t go his way and ultimately ran his ace-queen into the pocket queens of Carr.

The final five players went on their second break of the day with four of them hovering around similar stacks while Roeder was the clear front-runner. Even though the levels were reduced to 45 minutes, five-handed play continued throughout the next two levels and past the next break. Unfortunately for Roeder, he was on the wrong side of many of the short-stacked double-ups that occurred and he returned as the short stack himself.

He eventually called off his last eight big blinds with two face cards but was up against the ace-high of Beretta. Roeder was unable to find any help on the board and bowed out in fifth place. Following him to the payout desk in quick order was Deivis Rinkevicius. The Lithuanian came into the final table with the most experience in these situations but his aggressive style eventually caught up with him. Once he departed and the final three stacks were fairly level, a deal was discussed and agreed upon.

Coming back with just three players and the blind rapidly increasing, most of the game was played out preflop with a lot of shoving from each player. Carr grabbed a hold of a big chip lead that he would never look back on when both he and Beretta made full houses. Carr’s was the bigger of the two which earned him a double up and from there he managed to close things out.

That wraps up the coverage for the 2019 Unibet Open Malta festival but continue to follow along with PokerNews for other events currently taking place along with many more in the future.