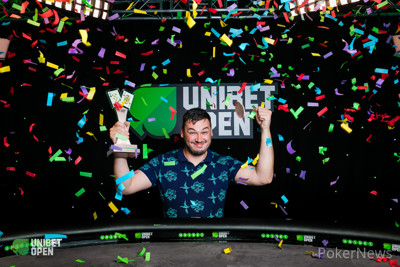 The 2018 Unibet Open Bucharest €1,100 Main Event has crowned its new champion. Anton Vinokurov managed to win the tournament in an impressive way; having the chip lead for the last day from start to finish, ending as the lone survivor of the 592-strong field and winning €103,060.

“When there were five players left, I knew I would win. I felt no other players could beat me.”

Vinokurov started the day with the chip lead and he managed to maintain the position as the biggest stack throughout the day. With 12 players left in the tournament, it was Vinokurov who had about 30% of the chips in play.

When Vinokurov was asked about how he felt about the day, he answered: “I was playing good. Some of the other players were playing good, and some were not playing good. I believed when I started play today as the chip leader that I must make it to the final table and finish in the top three. Then when there were five players left, I knew I would win. I felt no other players could beat me.”

The action of the final day

Seventeen players started the final day. Martin Wendt was the absolute short stack, and he busted out on the first hand of the final day. Wendt cashed for €5,870. Unibet Poker Ambassador David Lappin gave it his best, but he didn’t make it to the final table either, busting out in fifteenth place, collecting €6,520.

Tomasz Kozub ended the tournament as the unfortunate final table bubble after busting out in tenth place, worth €8,620. Kozub got all his chips in the middle on a queen-eight-seven board with two clubs while holding king-ten of clubs. Daniel Chutrov called with ace-queen, without a club, and held up after the ace of diamonds and the six of diamonds hit the board on turn and river.

Chutrov himself was the next one to hit the rail. Chutrov, a former Unibet Open winner, had to settle for ninth place after he ran his pocket aces into the pocket queens of eventual winner Vinokurov. They got it all in on the queen high flop, and Chutrov didn’t manage to hit an ace on either the turn on the river, and he was eliminated from the tournament. Chutrov was just €90 short of a five-figure payday, collecting €9,910 at the payout desk.

Amir Shomron was very active on the final table. He got it in with a king-high flush draw and two overcards to the board. Vinokurov had a straight and Shomron wasn’t able to hit the third heart to complete his flush. The Israelian poker player won €12,390 for finishing eighth in the Main Event.

Vinokurov was active at the final table and was using his stack to put a lot of pressure on his opponents. He moved all in from the cutoff with king-six and Vitalijs Zavorotnijs called from the big blind with ace-queen. Vinokurov was fortunate enough to hit a six on the flop, and Zavorotnijs failed to catch up on the Russian chip leader. Zavorotnijs got €15,490 for his efforts as seventh-place finisher.

Adrian Ionescu busted out of the Main Event in fifth place after starting the final table with just over three big blinds. Ionescu managed to ladder a couple of times, but eventually ended up shoving his ace-nine into the aces of Vinokurov. The board ran out clean without any nines on there, and Vinokurov sent another player to the rai. Ionescu banked a nice payday of €25,170.

Florin Elisei was the next victim of the run that Vinokurov was on. He shoved all in from the small with nine-trey suited and Vinokurov woke up with pocket tens. Vinokurov snap-called and despite Elisei hitting a nine on the flop, he wasn’t beatable in the tournament. Vinokurov was up to almost 15 million in chips at that point with less than 18 million in play. Elisei was, in the meantime, on his way to collect €32,720 at the cashier.

Only 15 minutes after the bust of Elisei, there was another bust at the Unibet Open Main Event final table. Back-to-back Unibet Open Bucharest Ladies Event champion Zainescu was eliminated after jamming her ace-four into the ace-jack of Cimpeanu. Cimpeanu flopped a jack right away, and it was all over for Zainescu on the turn. She ended up third in the tournament and collected €44,170.

Cimpeanu fired away with queen-trey after Vinokurov had hit trips on the flop. Both players checked on the turn but Cimpeanu hit a pair on the river, and he bet another time. Vinokurov took a couple of seconds before deciding to put the pressure on Cimpeanu, and he moved all in. Cimpeanu made the call after a couple of seconds, and he saw the bad news after Vinokurov opened his hand. Cimpeanu was the last Romanian standing in the tournament as the title went to the Vinokurov. Cimpeanu collected €64,050.

This concludes the five-day PokerNews coverage of the Unibet Open Bucharest from the JW Marriott Bucharest Grand Hotel. Until the next Unibet Open.