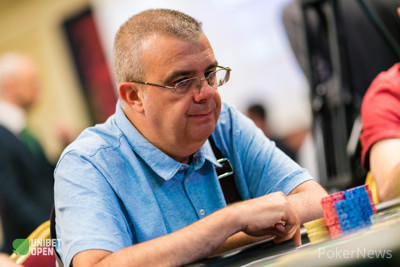 Krasimir Kirilov opened for 60,000 from under the gun. It folded to Anton Vinokurov who three-bet jammed his chip leading stack.

Kirilov appeared to be in good shape to double up to a seven-figure stack. It was looking better after the :::4c:::jd:::js came on the flop and after the :::Qh appeared on the turn.

However, it was a brutal ended for Kirilov as the :::9h spiked the river to give his opponent a set. Kirilov was eliminated in 18th place for €5,290, while Vionkurov increased his chip lead to 2,865,000.

Wendt Doubles Up After Rollercoaster Runout