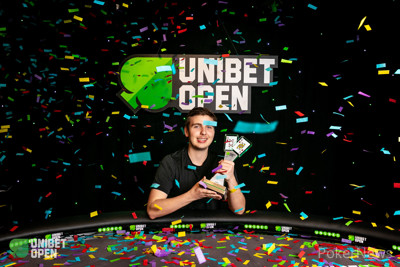 The 19-year-old Dane is one of the many young poker players that has relocated to Malta in order to pursue a card playing career. He bought in directly to play in this event. Speaking with PokerNews after the tournament, Jacobsen was happy but also realistic about his victory.

"I feel pretty good. I’m just happy, everything went so smooth. Not just heads-up but the entire tournament pretty much. I got so many coolers going my way and got many good hands that held up. I played decently but it was just meant to be, I think."

With the bankroll boost, Jacobson indicated he would be playing more tournaments, but the WSOP has to wait — he’s only 19, after all.

Asked whether he had anything special planned with his newfound wealth, Jacobson laughed.

"I might go to McDonalds or something," he chuckled. "I won’t do anything special with the money, I’ll use it for buyins."

Runner-up Piironen was the other top stack throughout the final table, but once heads-up with Jacobson it seemed the Finn was unable to even win a single hand anymore. Jacobson got smashed by the deck and Piironen finished in second place after bricking a flush draw against top pair.

Looking back at the one-sided heads-up affair, Piironen was still able to muster up a smile.

"Yeah, that was definitely a bad run. But I was in a good mood all day. I got good focus, got good hands."

Piironen is a cash game player by trade, but a rare foray into the tournament area paid it’s dividends with a career-high cash of €37,160. The Finn was clear on whether the taste of tournament success would drive him to play more in the future, including a possible journey to the upcoming WSOP.

"Not this year. Nothing is planned. I’m just going to play a lot of cash games online," he stated.

The nine finalists returned at noon local time and walked one by one to the final table. The second hand of the day was a crucial one that would dictate the course of the final table. With pocket tens, Roberto Morra flopped a set on Brand with pocket aces. The start-of-the-day chipleader lost one-third of his stack in the hand and never truly recovered from the loss.

For Nicolas Ludwicki, the final table lasted about thirty minutes before he shoved ace-nine into pocket jacks to finish in 9th place (€5,750). Shortly after, Brand received another big blow by losing ace-king against the ace-queen of Jacobsen in a preflop all-in situation, while Morra had already folded ace-queen. It was the key hand of the night: Jacobsen hit one of the remaining queens on the turn to survive and Brand was left short-stacked instead.

It took more than two levels before the next player busted out. It was Ilkka Heikkela (8th – €7,100) who bowed out after shoving queen-eight into ace-king. Heikkela was shortly followed by Brand, who reshoved pocket fives against Piironen’s pocket kings for around 20 big blinds. There wasn’t a five to be found and Brand was gone in 7th (€8,870).

Kristof Segers (6th – €11,140) busted shortly after Brand. Holding pocket tens, Segers got it all in preflop against the king-queen of Stropoli. The river brought a queen and a devastated Segers walked away from the table with his hands covering his face.

Germany’s Jan Eckert claimed 5th place honors, worth a payday of €14,600. After calling a 20 big blind shove with king-jack earlier (losing to king-queen), Eckert got his final chips in with ace-five against Piironen’s pocket nines. The Finn made a straight to end the German’s attempt at Unibet Open Glory.

Morra (4th – €18,980) and Stropoli (3rd – €25,630) found their Waterloo in the same hand, as Jacobsen scored a double elimination. Morra opened the action by open-shoving ace-six on the button, Stropoli reshoved ace-queen from the small blind and Jacobsen called with kings in the big blind. The board ran out jack-ten-deuce-queen-seven and both players were eliminated.

This suddenly brought deep heads-up action between Jacobson and Piironen, but it never became a true battle. Jacobson got smashed by the deck while Piironen received a far weaker run of cards. Piironen’s attempt to bluff his way up instead ended up being ill-timed, as he tried a bluff with jack-high on a board containing two aces. Jacobson held a third ace and wasn’t going anywhere, which relegated the Finn to the short stack.

Piironen did make one double-up with pocket queens against ace-three, but thirty minutes later it ended for the Finnish cash gamer in his second all-in. Holding jack-three of clubs, Piironen three-bet shoved a queen-eight-seven flop containing two clubs. Jacobson called with queen-ten and claimed the Unibet Open trophy after an offsuit four and king completed the board.

This concludes the five-day PokerNews coverage of the Unibet Open Malta from the InterContinental Hotel in St. Julians, which was ran in conjunction with Casino Malta. The next Unibet Open will be from August 2-5 at a yet to be announced destination. Until then!

Jacobsen Deals Another Blow to Brand