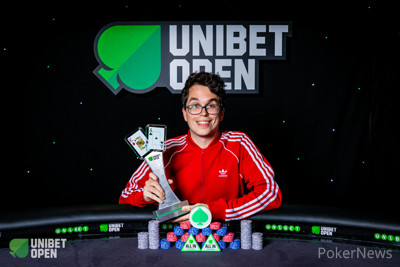 A record-breaking 456 entries created a £410,400 prize pool in London, and when all was said and done it was James who defeated Ben Winsor heads-up to take the title.

Day 3 saw 19 players return to action and it took over 11 hours of play before a champion was confirmed.

There was an exciting mix of players on the final table and included Damian Bell, who took down the High Roller title earlier on in the week.

"I ran pure at every point during the tournament. When I got short and needed a hand, it came. " said 29-year-old History student James after his victory.

The win for James came in unusual circumstances after he had to return home to North London early from his honeymoon and was reminded of the event by friends. Despite having to cut his holiday short, he has now turned the scenario into a double celebration.

When play began, there was a super fast start as three players departed in the first 10 minutes. Justin Kyriakides and Lei Wang both hit the rail before Pierrick Chaintreuil, who had secured an early double, then lost a vital flip holding ace-king against pocket tens.

Jamie Rutherford departed shortly afterward, running ace-nine into pockets kings, and Ryan Kelly, who had seen his ace-queen survive against ace-king on the money bubble in Day 2, then exited followed by Gordon Plomp, Yiqian Song, Gediminas Paulauskas and Jose Castillo.

Sweden’s Jakob Linden saw his hopes of a final table berth ended when his three-bet shove with ace-deuce lose out against Kamber’s pocket nines.

James and Bell shared the chip lead when the final table got underway, and it was table short stack Vamshi Vandanapu who was first to go. Vandanapu three-bet shoved from the big blind with ace-jack after Ben Winsor opened the action from under the gun with ace-queen, and the latter held to eliminate Vandanapu in 9th place.

There was then a long gap of an hour until Matas Budginas hit the rail in eighth place, having lost against ace-king with pocket tens.

James then paved the way for his victory after claiming two scalps including UO London High Roller champion Bell, who hit the rail in seventh place and Adrian Haaberg who took sixth.

Jon Sataoeen exited in fifth when he ran ace-queen into Winsor’s pocket queens before the last lady standing Mor Kamber turned a two big blind stack with 14 players remaining into fourth place for £25,150.

Andrew Christoforou, who made a series of big folds to ladder up, finally saw his run come to an end in third place for £33,950 when his king-jack was no match for James’ ace-queen.

The heads-up battled lasted an hour, and Winsor came from behind to take the chip lead before James reclaimed the advantage.

After two bricks followed, James’ overbet all in for 6m saw Winsor move into the tank, but the latter opted to call after two minutes and it was all over in London.

Next up on the Unibet Open schedule is the return to Malta in September, followed by a brand new event in Paris come December.

That’s all from us at PokerNews. We will see you at the next event.