Day 1b of the Unibet Open Malta €1,100 Main Event Begins at Noon

Day 1b of the Unibet Open Malta €1,100 Main Event Begins at Noon 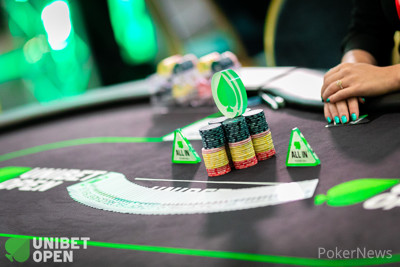 The first flight of the Unibet Open Malta €1,100 Main Event wrapped up just less than 12 hours ago and now it is time to return to the felt for Day 1b. There were a total of 113 players that showed up for Day 1a and today is expected to be even busier with many of the Unibet Ambassadors and streamers taking their seat.

Przemyslaw Zielinski set the mark on Day 1a with an impressive stack of 216,500 which will be tough to beat. Only 44 players made it through the opening flight in hopes of raising the trophy on Sunday night. Day 1c will also be taking place later tonight in which players may re-enter into that flight only.

The cards will go in the air at 12 pm local time inside the InterContinental Hotel in conjunction with Casino Malta for Day 1b. Each player will receive a starting stack of 30,000 chips with the blinds beginning at 100/100. Another 10 levels are on the schedule for today with the levels being 60-minutes in length. There will be a 20-minute break after every two levels and a 60-minute dinner break after the sixth level.

Late registration will remain open until the start of level 7 and as mentioned, a re-entry may only be used into the later flight 1c. That flight will begin at 9 pm but will be run as a turbo format with the levels only being 20 minutes. Both flights are expected to wrap up after the midnight hour and those fortunate enough to find a bag will return at 12 pm tomorrow for Day 2.

Follow along with the PokerNews live reporting team for all of the updates throughout both of those flights today along with the rest of the tournament.

Shuffle Up and Deal