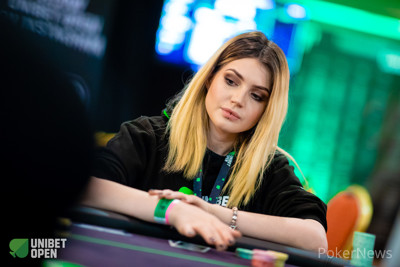 Scott "Sco" McMillan had just busted, having nursed a very short stack for quite some time, and his girlfriend Sophia "Djarii" White ran out of chips only moments later.

White had opened to 2,200 and Padraig O’Neill three-bet from two seats over, White then four-bet all in for 25,000 and O’Neill called.

The board ran out :::6s:::4d:::3d:::2h:::3h and that was it for "Djarii." To make things even worse for the esports gamers, Sven “Svennoss” Edelenbosch departed just a minute later from one table over to ensure a triple strikeout.