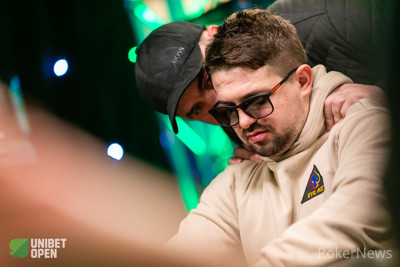 Alexandru Farcasanu had returned from the dinner break with an above-average stack, but he showed up in the recent casualties. A quick look at his table, the former feature table, revealed a big stack for fellow Romanian Stefan Fabian.

According to Fabian, it was a "big flip" that decided the fate of Farcasanu, who five-bet jammed out of the big blind with pocket jacks. Fabian on the button called with ace-king suited and got there.

Since coming back from the break, John "Swifty" Pyle has also doubled and is in a much better position now.