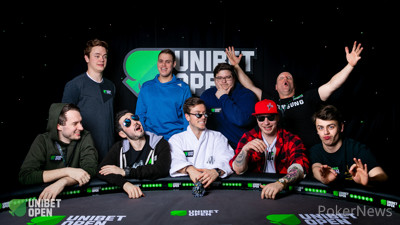 The special ski-edition to kick off the 2019 Unibet Open season has attracted a field of 120 entries for Day 1a of the €1,100 Main Event, of which 56 hopefuls bagged up chips, and a bumper field of more than 200 entries is expected for the second regular flight. Day 1b will get underway at 3 p.m. local time at the New Montana Hotel and the turbo heat 1c with single re-entry for all those that busted previously wraps up the Main Event schedule with 20-minute levels as of 10 p.m. local time.

Among those expected to join the action in the hours to come are the Unibet Poker ambassadors such as Daiva Byrne, Monica Vaka, Espen Uhlen Jorstad, Ian Simpson and Dara O’Kearney, as well as most of the esports streamers that took part in the esports Battle Royale XII. Especially John "Swifty" Pyle will be one to look out for after his victory in the Tag Team Championship alongside UnibetPoker.fr ambassador Alexandre Reard. The American followed that up with a second place finish in the Battle Royale competition, which was won by Kevin "Rotterdam" van der Kooi.

Both of today’s starting days will feature eight levels in total and the late registration remains open until the start of level seven. Day 1b will have levels of 60 minutes each and a 60-minute dinner break at the end of level four, while the turbo heat 1c features 20-minute levels with a single break before bagging and tagging.

The PokerNews live reporting team will be on the floor to provide all the action and you can also watch the live stream action with hole cards displayed on the feature table on a security delay of 30 minutes on the Unibet Poker Twitch channel.