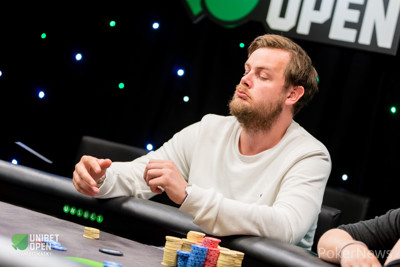 The turn was the :::Ks and Hansen was officially drawing dead. Harkes checked, Hansen tried to take it with a second barrel of 225,000 and Harkes called again.

The river brought the :::Jh. Harkes checked a third time and Hansen emptied the clip with a 685,000 shove. Harkes, with 595,000 behind, thought around a minute before making the correct call with his two pair.