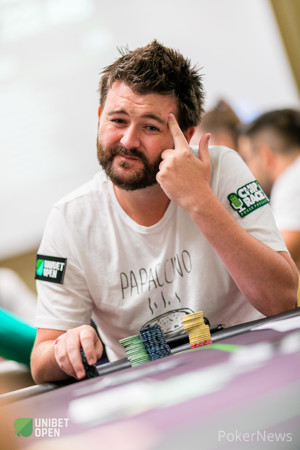 Day 1b turned out to be the biggest day of them all attracting 273 entries. All of the Unibet Poker Ambassadors and Esports players played Day 1b, except for Daiva Byrne and Sophia White so they could play the #QueenRules Ladies Event today.

Day 1c was a first at the Unibet Open and it offered players the chance to reenter the tournament. All players that busted out of 1a or 1b got the opportunity to rebuy into the 1c flight which had 20-minute levels instead of 60-minute levels. Day 1c started at 8 p.m. and was done by midnight, just as 1b.

Himanen is the chipleader of Day 1b with 303,000 in chips. The chip leader of Day 1a was Turgeman with 302,500 and Himanen managed to grab the overall chip lead by just 500 chips. Himanen had been playing a big stack for most of the day and he managed to take over Oghabian to end the day as chip leader. Others that made it through on Day 1b include Leon Tavenier (144,500), Unibet Poker Ambassador David Lappin (103,000), Unibet Poker Ambassador and esports legend Alan “Hotted89” Widmann (90,000), and Nicolae Bogdan (63,000).

The tournament will resume tomorrow with the field combined at noon local time. The plan is to play down to a final table or 11 60-minute levels, whichever comes first. The PokerNews live reporting team will be there to provide updates throughout the entire day.