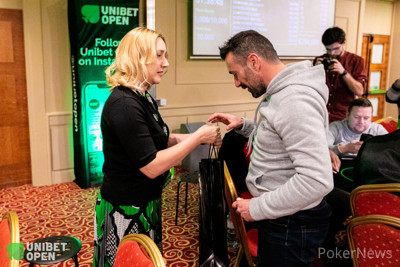 After a grueling bubble that went on for more than two hours, they are finally in the money. Short stacks have been doubling at every opportunity, but the run had to come to an end eventually.

Cedric Freling called off his short stack in the cutoff after a middle position raise from Steven Vollers that covered Freling’s stack of 11,000. After all the other action on other tables was complete, they revealed the hands, and Freling was ahead with pocket queens against the :::As:::Jc of Vollers.

That all changed on the flop of :::2c:::5h:::Ax but the :::4s turn gave outs to a chop to keep Freling alive. The river :::6c wasn’t any help for Freling though, and he was the final person to bust before the money.

Vollers Pulls in Huge Pot to Crack One Million Chips