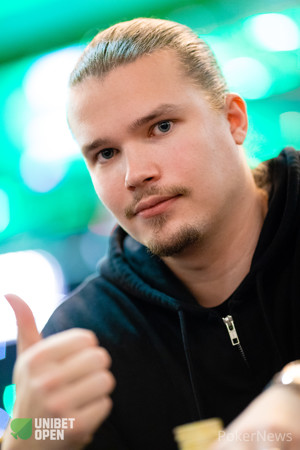 The first of three starting days of the 2018 Unibet Open Dublin Main Event is in the books and the tournament is off to a decent start, as 97 players paid the entry fee of €1,100 at the Bonnington Hotel in the Irish capital. After ten levels of 60 minutes each, only 24 players bagged up and a trio pulled away at the top of the counts.

Elias Vaaraniemi participated only in his second Unibet Open Main Event ever and won his package for Dublin by earning challenge points on Unibet Poker. The Finn ended Day 1a as the chip leader with 379,200, beating Norway’s Per Helge Gassand (367,000) and Henri Koivisto (330,500) for the top spot. Koivisto, an online Pot-Limit Omaha specialist with more than $270,000 in live cashes, entered late and earned his spot on the overnight podium with a late surge. In a key hand, he flopped a full house with jack-ten suited and fired three barrels, Graham Garside was unfortunate enough to flop an inferior full house with pocket tens and became the last casualty of the day.

Sinclair arrived just one day prior in Dublin and was on his way to the rail in the penultimate level of the night when he was all in and at risk with ace-ten against the pocket tens of Mark Rink and the pocket jacks of Guillaume Dupuy. However, an ace appeared on the river and Sinclair tripled up.

Two Unibet Poker ambassadors took to the felt in David Vanderheyden and Daiva Byrne, but both fell short of making Day 2 just yet. Byrne had dropped to 15 big blinds in the penultimate level of the night and lost a flip with pocket eights against the ace-jack suited of Nicolas Storm-Christensen.

All those that busted in the first of three starting days have another chance at making Day 2 in the turbo heat 1c, which kicks off on Friday, November 23, 2018 as of 2018. Another 10 levels will be played then, however, the level duration will be shortened to 20 minutes each.

Another three Unibet Open Side Event trophies were awarded throughout the day. The first tournament to finish was the €2,200 High Roller, followed by the €330 Deepstack Open and the €220 NLH Freezeout.

Day 1 of the €2,200 High Roller wrapped up with 17 players out of 22 entries remaining and Unibet Poker ambassador Dara O’Kearney at the top of the leaderboard. The registration remained open and another five players opted to enter or re-enter, creating a field of 27 entries and a prize pool of €54,000. Only the top five spots were paid and notables to bust before the money included the Unibet Poker ambassadors David Lappin and Dara O’Kearney, Jack Sinclair, Kevin Killeen and UnibetPoker.fr ambassador Alexandre Reard.

Janos Kurtosi saw his aces cracked by the pocket treys of Benny Glaser and Glaser finished the job two hands later to send Kurtosi to the rail as last player without anything to show for. It didn’t take long to set up the heads-up for the trophy between Glaser and Valentin Cristea. A topsy-turvy battle of more than two hours saw Glaser’s 3-1 chip lead turned into a 1-3 underdog, but the three-time WSOP bracelet winner pulled back into a 7-1 lead. In the final hand, Glaser held king-jack suited and dominated Cristea with queen-jack. Three clubs on the board gave Glaser a flush and the title.

Among the eight finalists were five Irishmen and they made up for the top four spots after notables such as Mihai Manole and Dennis Kleinleugemors departed in 8th and 5th place respectively. The final four cut a deal and played for another €1,200 to the winner. Sean O’reilly was the chip leader at the time of the deal agreement but ultimately finished second to Samuel Baneham while taking home the most money in the event.

Last but not least, the €220 NLH Freezeout attracted a field of 66 entries and the top 9 spots were paid. Finland’s Jari Hurri ended up as the bubble boy, among those to cash were Aurelie Reard and Mick Graydon. Right after Graydon’s exit in 3rd place, the remaining duo chopped and Apostol Beg held the chip lead to claim the trophy.

Day 1b of the €1,100 Main Event kicks off at 12 p.m. local time and a big field is expected with plenty of Unibet Poker ambassadors and Unibet Open esports gamers in action. Day 1c follows as of 9 p.m. local time and the survivors of all three starting days combine for Day 2 on Saturday. As usual, the PokerNews live reporting team will be on the floor to provide all the action.