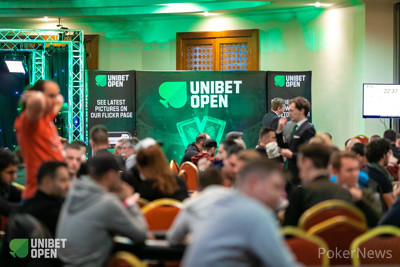 A big field is expected for Day 1b of the 2018 Unibet Open €1,100 Main Event, as the vast majority of online qualifiers, esports gamers, Unibet Poker ambassadors, Irish legends of poker and familiar faces of the popular tournament series will join the action for the second starting day at the Bonnington Hotel in Dublin. Yesterday’s first flight drew a total of 97 entries, of which 24 players already punched their tickets for day 2.

All participants will receive 30,000 in chips and play a total of 10 levels, the registration remains open for the first six levels and the following break. A single re-entry is available to all players that bust throughout Day 1a and Day 1b, however, the second entry has to be taken in the turbo heat 1c as of 9 p.m. local time. For the final starting day, the level duration will be shortened to 20 minutes each and represents the last chance to secure a seat for Day 2 in the second-ever Unibet Open Main Event in Dublin.

On top of all the live updates right here on PokerNews, you can also watch the livestream action on the Unibet Open Twitch channel on a security delay of 30 minutes until a champion is crowned on Sunday, November 25th, 2018.