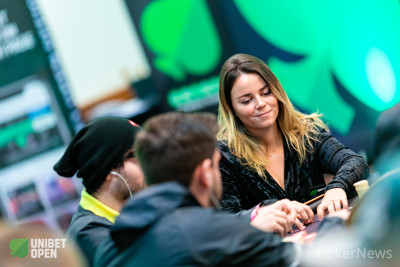 Julien Kron made it 6,000 to go from the cutoff and Charlotte van Brabander three-bet all in for her last 34,000 in the small blind, which Kron quickly called when it was his turn to act.

The Belgian was ahead preflop but fell behind on the :::Qd:::5c:::3c flop, and things got worse on the :::8c turn. Only two aces were left for Van Brabander, and the river was the blank :::9s. Van Brabander will likely enter the €80+10 Queen Rules Side Event shortly, a Ladies Event hosted by Unibet Poker ambassador Daiva Byrne. So far, there are three tables running with a total of 25 entries.