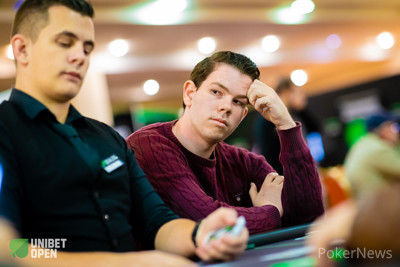 Paul Leckey had lost a big pot and was left with 400 chips, forced all in from the small blind and not in his seat when the cards were back in the air. When he had arrived to his seat, there had been significant action already as 2018 Unibet Open London champion Andreas Wiborg moved all in for 13,100 in the cutoff and was called by Julien Kron on the button.

Leckey, however, had not been dealt any cards and the floorman was called to determine the proper proceeding. Since Leckey would have been forced all in and his cards mucked already at that point, it was ruled as a live hand and Leckey’s elimination was confirmed prior to the showdown. Only then, Wiborg and Kron tabled their cards.

Leckey had already returned with a new ticket in the hand, a glass of wine in the other, and headed over to the turbo heat 1c.